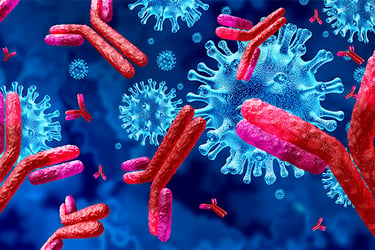 The results of a prospective cohort trial following children between the ages of 6 months and 2 years were recently published in Pediatrics, the journal of the American Academy of Pediatrics. This study followed nearly 600 children and reported a negative association between vaccine-induced antibody levels and antibiotic use. Among children receiving regular childhood vaccines, specifically diphtheria-tetanus-acellular pertussis (DTaP), inactivated polio (IPV), Haemophilus influenzae type b (Hib), and pneumococcal conjugate (PCV) vaccines, not only were vaccine-induced antibody levels lower among children given antibiotics, but a cumulative effect was observed.

Each course of antibiotics was associated with a greater decrease in protective antibody levels; pre-booster antibody levels to DTaP antigens were significantly reduced by 5.8%, Hib by 6.8%, IPV by 11.3%, and PCV by 10.4%, with even greater post-booster reductions in antibody levels, as much as 21.3% lower with each course received. There was also a higher frequency of vaccine-induced antibody levels below a protective threshold among children who had received antibiotics, with broad-spectrum and more frequent dosing/duration all associated with negative effects. While there were some limitations to this study, such as its small size and inability to report data longitudinally, it is the first of its kind, i.e., the first human study to report a negative effect of antibiotics on vaccine-induced antibody levels. Animal studies suggest this may be because of disruption of the gut microbiome, hopefully prompting an analysis of the microbiome in future studies.

Because the microbiota is so complex, containing hundreds of different bacterial species, it was not known how the prese...