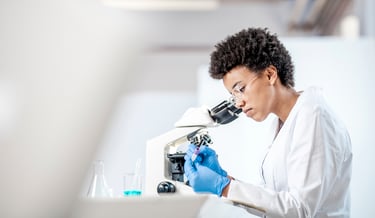 An intriguing study found different effects on pregnant mice’s liver metabolism as a result of vitamin D deficiency (VDD) depending on genetic background.

Maternal VDD has serious implications for both fetal and maternal health, including fetal growth and skeletal health, as well as increased risk of gestational diabetes and pre-eclampsia for the mother. However, the molecular mechanisms remain a mystery.

Metabolomics has introduced new ways to investigate these mechanisms and help to define new potential health consequences. This work is already being done in studies that explore connections such as those between the metabolic regulation related to oxidative stress and inflammation in pregnant women and vitamin D, and exploring the effects of supplementation on metabolic biomarkers of obesity-related phenotypes in obese adults.

However, metabolomics research on maternal vitamin D status during the perinatal stage is lacking. It could be of special significance because of the ability of liver metabolomics assessment to show us a snapshot of one of the most important organs in nutrient and drug metabolism with a high level of sensitivity.

This particular study looked at the extent to which naturally occurring genetic differences affect maternal liver metabolic response to VDD, particularly during the perinatal period. A panel of 8 inbred Collaborative Cross mouse strains with different genetic backgrounds were used. A vitamin-D-deficient or -sufficient diet was provided and metabolite changes were observed.

The results showed a significant VDD effect, with altered concentrations of 78 metabolites included in lipid, amino acid and nucleotide metabolism. Metabolites in unsaturated fatty acid and glycerophospholipid metabolism pathways were significantly enriched. The amount of metabolic response to deficiency was strongly dependent on genetic strain. (Two distinct strains, CC017/Unc and CC032/GeniUnc, were especially sensitive to VDD, yet each strain affected different pathways.)

Human research is warranted to ascertain if the effects seen here of vitamin D in people with different genetic backgrounds are similar.

A compelling article in The Journal of the American Osteopathic Association highlighted the important role of magnesium ...

END_OF_DOCUMENT_TOKEN_TO_BE_REPLACED

Research has shown that a healthy inflammatory response is an essential part of the body’s healing process. Yet ongoing ...

END_OF_DOCUMENT_TOKEN_TO_BE_REPLACED

Results from a large trial of older adults in the U.S. were recently published in BMJ, detailing the outcome of a 5-year...