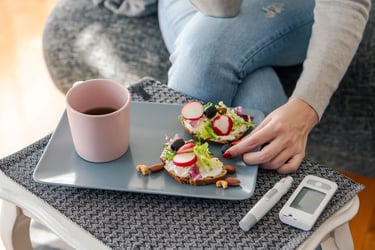 A paper published recently in BMJ Nutrition, Prevention & Health documents remission of type 2 diabetes among patients following a low-carb diet as well as significant improvements in metabolic health among patients with decreases in HbA1c who didn’t achieve remission.

A small practice in the UK has been using low-carbohydrate diets for type 2 diabetes (T2D) since 2013. After a median of approximately three years (33 months), among the patients who opted to follow the diet, remission of diabetes was achieved in 77% of those who’d been diagnosed within less than one year. The remission rate fell to 20% in those who who’d been living with T2D for more than 15 years. Overall, among the cohort that adhered to the diet, remission was achieved in 51%. In the year ending January 2022, this practice spent £ 68,353 per year (approx. $81,500) less than the area average on diabetes drugs – a cost saving that has powerful implications for national healthcare services as well as for individual families.

Remission of diabetes was defined as HbA1c less than 6.5% measured at least 3 months after cessation of glucose-lowering medications (based on criteria from an international, multidisciplinary expert group convened by the American Diabetes Association).

Those who achieved remission had adopted the low-carbohydrate approach sooner after diagnosis. Remission was more likely in those who started with a lower HbA1c, but those with the highest HbA1c showed the greatest improvement in this measurement, even if remission was not achieved. And those who did not achieve remission still saw significant improvements in blood pressure, triglycerides, total cholesterol and LDL-C, and had significant reductions in body weight.

The average age of the patients was 63 years, with a range from 54-72, showing that these substantial improvements weren’t limited to younger adults. The paper’s authors suggested focusing on “metabolic age” – how long someone has had T2D – rather than chronological age, as this may be a better predictor of achieving remission. They also cited the importance of ongoing support and continued monitoring to facilitate long-term adherence.