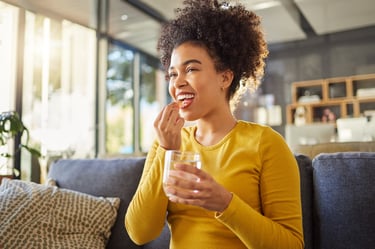 Results of one of the few existing long-term randomized trials evaluating the use of multivitamins on cognitive function in older adults were recently published in the journal Alzheimer's & Dementia: the Journal of the Alzheimer's Association. This study was part of the COSMOS-Mind (COcoa Supplement and Multivitamin Outcomes Study of the Mind) 2x2 factorial trial, in which participants over age 65 (mean of 73) were randomized into one of four groups to receive a cocoa flavanol extract, a multivitamin/multimineral (MVM), both supplements, or a double placebo, with approximately 450 in each group available for 3 years of follow-up. The primary outcome was a global cognition composite, and secondary outcomes included episodic memory and executive function composites.

Although the cocoa extract had no effect on either primary or secondary outcomes, the MVM was more promising, with a statistically significant benefit for global cognition. This benefit was particularly pronounced among participants with a history of cardiovascular disease (CVD). Indeed, among individuals with a history of CVD, overall global cognition was found to decline over the 3-year period, while those receiving the MVM had an increase from baseline. MVM supplementation was also associated with increases in both episodic memory and executive function over the 3-year period.

The authors point out that the only previously published long-term study evaluating MVM use and cognitive function found no benefit, though this earlier study was limited to only men who were predominantly white and non-Hispanic (vs. this more diverse cohort of men and women), it may have missed an early benefit of MVM supplementation, and MVM composition had changed, such as the addition of lutein and lycopene and increases in vitamin D and K dosage in the more recent trial.

As we sit down with family and friends to celebrate Thanksgiving today, it is important to reflect on how central these ...

END_OF_DOCUMENT_TOKEN_TO_BE_REPLACED

Memory and thinking tend to decline when adults enter their late 70s, but the underlying factors for this diminished cog...

END_OF_DOCUMENT_TOKEN_TO_BE_REPLACED

Results from the UK Biobank study, one of the largest cohorts of middle-aged adults to provide data for HbA1c across the...