Results from a large trial of older adults in the U.S. were recently published in BMJ, detailing the outcome of a 5-year study evaluating the use of s...

The Mechanisms Behind Lactose Intolerance 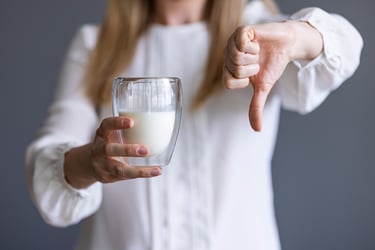 A recent paper highlights the mechanisms behind lactose intolerance, a clinical syndrome that causes patients to display symptoms on consumption of food substances containing lactose, the disaccharide present in dairy, milk products, and mammalian milk.

Normally upon the consumption of lactose, it is hydrolyzed into glucose and galactose by the lactase enzyme, which is found in the small intestinal brush border. A deficiency of this enzyme means there is a presence of unabsorbed lactose within the bowel. This results in an influx of fluid into the bowel lumen causing osmotic diarrhoea.

Colonic bacteria also ferments the unabsorbed lactose-producing gas (hydrogen, carbon dioxide, and methane), which hydrolyzes lactose into monosaccharides. This results in an additional influx of fluid within the lumen. The overall effect of these mechanisms results in various abdominal symptoms, which manifest 30 minutes to 2 hours after ingestion of dairy products. The severity of symptoms depends upon the amount of lactose consumed and the severity of the disease. Common symptoms may include diarrhea, abdominal bloating and pain, fullness and flatulence.

Very often, lactase deficiency is hereditary. There is a gradual decline in lactase enzyme activity with increasing age. Enzyme activity begins to decline in infancy, and symptoms manifest in adolescence or early adulthood. This is known as primary lactose deficiency or lactase non-persistence.

Secondary lactase deficiency can occur when there has been injury to intestinal mucosa due to several infections, inflammations, or other diseases such as Crohn’s disease or gastroenteritis.

Lactose intolerance is a common condition, though rare in children younger than 5. It is most often seen in adolescents and young adults. On average, 65% of the world's population is lactose intolerant, and is most common in African Americans, Hispanics/Latinos, and Asians, while least prevalent in people of European descent. Ethnic groups with a higher prevalence of lactose intolerance also are more likely to have lactose non-persistence.

It should be remembered that milk is rich in calcium and vitamin D. and prolonged avoidance of milk can result in respective deficiencies. The paper highlights the important difference between lactose intolerance (which is a gastrointestinal disorder) and milk allergy (which is an autoimmune reaction against certain milk proteins). Milk allergy is life-threatening and presents early in infancy, while lactose intolerance usually presents in adolescence or early adulthood.

Management of lactose intolerance consists of dietary modification and lactase supplementation, as well as addressing any underlying conditions in those with secondary lactase deficiency. Many patients of all ages have a good prognosis and show considerable improvement in symptoms with dietary modification alone.