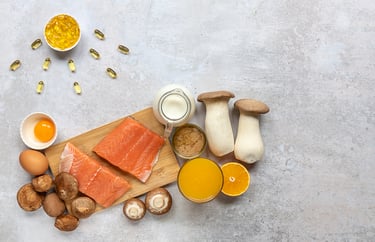 Results from a large trial of older adults in the U.S. were recently published in BMJ, detailing the outcome of a 5-year study evaluating the use of supplemental vitamin D and/or omega-3 fatty acids and the development of autoimmune disease. Part of the large-scale vitamin D and omega-3 trial (VITAL), it was randomized, double-blinded and placebo-controlled with nearly 26,000 participants over age 50 (mean 67.1). The study was a 2x2 factorial design; some subjects received 2000 IU cholecalciferol per day, some received 1 g/day fish oil (460 mg EPA & 380 mg DHA), some received both, while the remainder received only placebos.

Vitamin D supplementation, either alone or with fish oil, led to a lower incidence of autoimmune disease compared to placebo. When compared to the group receiving both placebos, those receiving only vitamin D had a 31% lower incidence, though if the first two years were excluded from analysis (pre-planned, to test for latent effects), this increased to 39%. There also appeared to be a greater benefit of vitamin D for participants with a lower body weight, with a somewhat linear relationship as observed in previous studies. For example, for a BMI of 18 the hazard ratio (HR) was 0.47, versus a HR of only 0.9 among those with a BMI of 30.

Although omega-3 supplementation was associated with a 26% lower incidence, this intervention was only of marginal significance (p = 0.07). However, when “probable” cases of autoimmune disease rather than “confirmed” cases were analyzed, omega-3 supplementation was associated with a significant 18% reduction in incidence, with a suggestion that effects were greater with a longer period of supplementation. It is an open question how protective these nutrients would be if taken for longer than 5 years, or beginning at an earlier age.

A compelling article in The Journal of the American Osteopathic Association highlighted the important role of magnesium ...

END_OF_DOCUMENT_TOKEN_TO_BE_REPLACED

Research has shown that a healthy inflammatory response is an essential part of the body’s healing process. Yet ongoing ...

END_OF_DOCUMENT_TOKEN_TO_BE_REPLACED

In a recent meta-analysis of 9 cohort studies that included a total of nearly 3,000 participants, the relationship betwe...