Can Chocolate Help with Oxidative Stress? 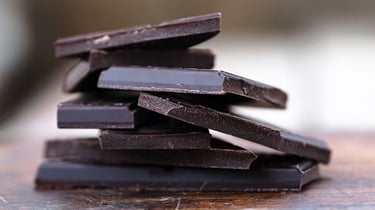 Can eating chocolate or drinking wine, coffee or tea play a role in keeping us young? According to a team of researchers led by Prof. Dr. Ivana Ivanovi-Burmazovi from the Chair of Bioinorganic Chemistry at Friedrich-Alexander-Universität Erlangen-Nürnberg (FAU), together with researchers from the USA, compounds within these foodstuffs can activate with zinc to protect against oxidative stress.

This specific compound within wine, chocolate, tea and coffee is a hydroquinone group found in polyphenols. Zinc activates the hydroquinone groups, producing natural protection against superoxide, a byproduct of human cell respiration that damages the body's own biomolecules. Although a natural process that is a basic part of our metabolism, oxidation can be accelerated and create a greater risk for inflammation and disease. Oxidative stress is also a known contributing factor to ageing and a low life expectancy.

Hydroquinone alone may not be able to break down superoxide, but when combined with zine, a metal complex that mimics a superoxide dismutase enzyme (SOD) is created. These enzymes protect the body from the breakdown processes caused by oxidation. In other words, they have an antioxidant effect.

In this study it was demonstrated that a complex of the redox-inactive metal zinc(II) with a hexadentate ligand containing a redox-active quinol can catalytically degrade superoxide.  “[This was] demonstrated by both reactivity assays and stopped-flow kinetics studies of direct reactions with O2•− and the zinc (II) complex.”  H2O2 arise[s] from the dismutation of superoxide (O2•−), which is generated within the mitochondria.”[1], [2]

Although benefits have been found in pairing these hydroquinone groups found in wine, coffee, chocolate and tea with zinc, more research is necessary.