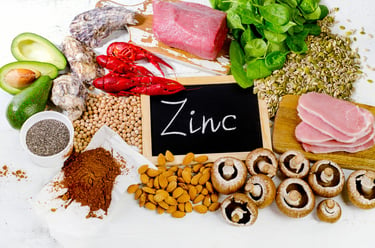 Zinc is an essential trace mineral with a wide range of biological functions. Hedgehog (Hh) pathway is a key regulator of cell growth and development that helps to establish the body plan of all animals with bilateral symmetry. In many diseases, zinc deficiency and elevated level of Hh ligand co-exist, including prostate cancer, lung cancer, ovarian cancer, and autism. In this study, researchers demonstrate that there is a link between zinc and Hh signaling. The Hh ligand, which is the upstream activator of Hh signaling, originates from Hh autoprocessing. In an in vitro Hh autoprocessing assay, researchers showed that zinc inhibits Hh autoprocessing. They then demonstrated that zinc inhibits Hh autoprocessing in a cellular environment. They found that zinc binds the active site residues of the Hh autoprocessing domain to inhibit autoprocessing. In normal physiology, zinc likely acts as a negative regulator of Hh autoprocessing and inhibits the generation of Hh ligand and Hh signaling. According to corresponding author Chunyu Wang, under normal conditions “zinc will inhibit the production of the Hh ligand, and therefore inhibit the Hh pathway, but if there is a zinc deficiency, the pathway can be activated due to enhanced production the Hh ligand.” Their data suggest a causal relationship between zinc deficiency and the overproduction of Hh ligand.
J Xie, et al. Zinc Inhibits Hedgehog Autoprocessing: Liking Zinc Deficiency with Hedgehog Activation. Journal of Biological Chemistry, 2015; jbc.M114.623264 DOI: 10.1074/jbc.M114.623264
ML Martialay. Zinc Deficiency Linked to Activation of Hedgehog Signaling Pathway. RPI News. Apr 16, 2015