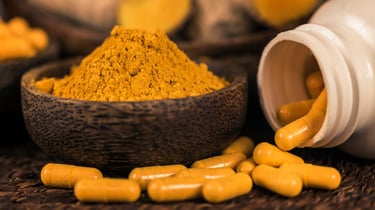 Curcumin has demonstrated several medicinal properties, including possessing an inhibitory effect on the virulence, quorum sensing (QS), and biofilm initiation.(1) Curcumin has also exhibited an inhibitory effect on the QS system of numerous pathogens, including E. coli and P. aeruginosa. This study examined the liposomes of curcumin as an inhibitory mechanism on QS system of Aeromonas sobria (AS), which “is a Gram-negative, rod-shaped, facultative anaerobic, motile, and flagellated bacterium,” that typically flourishes in various types of waters, as well as in soil and food. It is also “an opportunistic pathogen for animals and humans, [as] it can cause extra-intestinal infections and gastrointestinal diseases.”(2) In bacteria, a cell to cell communication mechanism called “Quorum sensing” allows the bacteria to monitor their population density by secreting signaling molecules or autoinducers.(3) These chemical signals are released from bacteria and accumulate in the environment. Once a threshold concentration is reached, the bacteria can bind to receptor proteins and trigger the expression of a series of QS targeting genes.(4) “Blocking the bacterial QS system has been considered as an alternative of traditional antibiotics.” Indeed, “many natural products and synthetic materials have been [demonstrated] to be quorum sensing inhibitors (QSIs). In this study the QS-controlled swimming and swarming motility of A. sobria was significantly inhibited by curcumin, as both liposome and free curcumin forms. Additionally, curcumin liposomes were demonstrated to be more effective than free curcumin in inhibiting swimming and swarming motility of A. sobria. Inhibition of biofilm formation was demonstrated up to 93.35% when compared to control (p < 0.05). The results also suggested that curcumin, “although having an effect on the on the biofilm formation, did not interfere with normal growth of bacteria.”