A Recent Study Highlights Importance of DHA in Lung Health 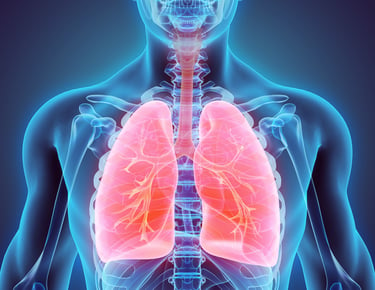 In a recent study, however, the impact of omega-3 fatty acids prevailed over omega-6s. The study investigated the impact of two different omega-3 to omega-6 ratios on lung cell inflammatory response. The proinflammatory response of human alveolar cells was measured when exposed to either a 1:2 or 1:7 ratio of omega-3 to omega-6 PUFAs. The study demonstrated that shifting the predominant fatty acid from omega-6 to omega-3 lowered proinflammatory mediator release in human alveolar cells.

Alveolar epithelial cells were exposed to an inflammatory stimulus composed of bronchoalveolar lavage fluid collected from ARDS patients after intubation and while on mechanical ventilation. The content of proinflammatory cytokines was markedly elevated in the lavage fluid. After 18 hours the cultured alveolar cells were exposed to DHA and arachidonic acid (AA) in 1:2 and 1:7 ratios respectively. 24 hours later the cultures were evaluated for cytokines and prostaglandins release.

Results showed that the 1:2 DHA/AA ratio reversed the predominance of omega-6 over omega-3 in the cell membranes. In addition, proinflammatory cytokine release was reduced by the 1:2 ratio but increased with the 1:7 ratio. Also, the 1:2 ratio reduced COX-2 and PGE2 as well as NF-κB, while it increased activation of PPARγ and IL-10 release.

People eating a standard American diet tend to demonstrate a high omega-6 to omega-3 ratio and it is compelling to note the impact these ratios have on cytokine balance. The ability of DHA to downregulate cytokine and prostaglandin release suggests that this PUFA might be useful as a nutrient to support healthy inflammatory processes.