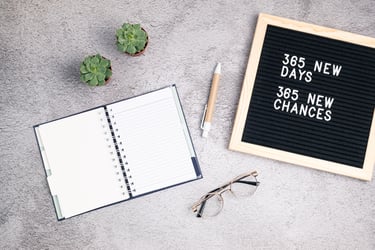 As the new year nears, it may be worth considering the variables affecting the sustainability of typical resolutions, and a study published recently offers a bit of insight. Recruited from the general public, participants interested in joining the study were randomized to one of three groups, all of which were given basic instructions to set resolutions for themselves which were subjectively measured over the following year.

The control group had very little support, with only quarterly self-reported assessments, while the two experimental groups had more frequent monthly assessments and were also given more information about successfully setting and achieving goals. For example, participants in both of the experimental groups were given information about having social support and were asked to name a specific person responsible for supporting them. One of these two groups was also given extended support, including advice to set goals in terms of approaching something versus avoiding something, as well as setting specific, measurable, accepted, realistic, and time-framed (SMART) goals.

The main take-away from this study was that approach-oriented goals were more likely to be maintained than avoidance-oriented ones (57.9% vs. 47.1%). Surprisingly, only the group receiving some support had better success than controls, and even this was not by a large margin (the group receiving extended support did not do better than the control group). The authors suggest that the lack of benefit noted in the group receiving extended support may be a consequence of their goal setting and self-reported success – by setting very defined and time-specific goals, they may be more likely to recognize when these goals weren’t achieved versus more amorphous goals. Nonetheless, even in this population of motivated participants, more support did not necessarily help, though setting approach-oriented goals did. Previous research suggests that a combination of both abstract and specific goals may be better than either alone.