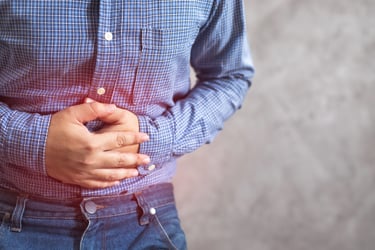 A recent study on both mice and human subjects has revealed the biological mechanism that explains why some people experience irritable bowel syndrome (IBS) and other food intolerances when they eat certain foods.

IBS is a common problem thought to be experienced by up to 20% of the world’s population. It is currently viewed as a highly complex problem both in diagnosis and treatment. Some protocols that have proved effective in certain cases are gluten-free and other dietary recommendations. However, the mechanisms behind the successes have been a mystery, since the patients were not allergic to the foods in question, nor did they have known conditions such as celiac disease.

This new research revealed a mechanism that connects certain foods with activation of the mast cells that release histamine, and subsequent pain and discomfort.

Since people with IBS often report that their symptoms began after a gastrointestinal infection, such as food poisoning, scientists believe that certain foods might sensitize the immune system to that food. In this study, they tested this hypothesis by infecting mice with a stomach bug, and at the same time fed them ovalbumin, a protein found in egg white that is commonly used in experiments as a model food antigen. Once the infection cleared, the mice were given ovalbumin again, to see if their immune systems had become sensitized to it. The results were affirmative.

It was ascertained that the ovalbumin on its own provoked mast cell activation, histamine release, and consequent digestive intolerance with increased abdominal pain. This was not the case in mice that had not been infected with the bug and received ovalbumin.

The study then went on to see if people with IBS reacted in the same way. When food antigens associated with IBS (gluten, wheat, soy and cow milk) were injected into the intestine wall of 12 IBS patients, they produced localized immune reactions similar to that seen in the mice. No reaction was seen in healthy volunteers.

Due to the small number involved in the human trials, confirmation of these findings is required and indeed further clinical trials are already underway but knowing the mechanism that leads to mast cell activation is crucial and will lead to novel therapies for these patients, including the possibility of antihistamines.