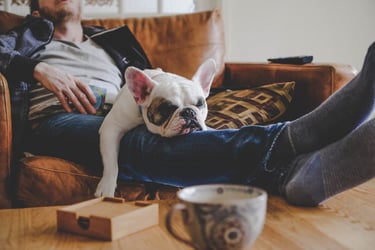 It’s no secret that life can get overwhelming at times. Anxiety is a common response to the stresses and fears of modern life. We’re continually bombarded with information, on our cell phones, television, and the internet. Not to mention in normal physical everyday situations.

Our goal-driven society places little emphasis on rest. Feeling like we always have to try harder can motivate you, or lead to paralysis and anxiety. All this stress is leading to a global epidemic of burnout and anxiety. Anxiety disorders come in many forms and currently affect a massive 40 million adults in the US. That’s 18.1% of the population who have an anxiety disorder.

We’ve been drinking tea for thousands of years the world over. People often have a cup of tea to unwind and relax. Historically drinking tea has been synonymous with relaxation. Now science is backing up this long-held belief. A compound discovered in 1949 called L-theanine was singled out as the amino acid responsible for tea’s soothing properties.

L-theanine is a naturally occurring water-soluble, non‐protein amino acid found in tea leaves. Commonly taken by people to relieve stress, promote sleep and reduce anxiety, theanine can be chemically or biologically synthesized. L-theanine is most commonly found in green tea leaves and it’s also been identified in mushroom (Xerocomus badius).

So far, the research is positive. L-theanine has been found to modulate brain function, including brain waves. Several studies have found that L-theanine produces alpha waves (α-waves) without causing drowsiness. Αlpha waves are neural oscillations that pulse at a frequency of 8-12hz. This is a state of mind that aids in mental coordination, mind-body integration, and calm.

What’s more, the lack of change to theta (θ-waves) waves, means that L-theanine doesn’t make you drowsy. One study exposed that its attention-related alpha that gets up-regulated, which induces a state of calm while retaining the ability to focus. Perhaps that’s why L-theanine is Taylor Swift’s vitamin of choice for promoting relaxation.

D-Theanine Found in 5 Out of 6 Supplements

D-theanine was previously disregarded, as it was thought to make up just 1-2% of the compounds in tea. D-theanine in supplements is a bad thing, as it can inhibit the absorption of L-theanine. Additionally, researchers at Iowa University have found that D-theanine could be a health risk. Shockingly, many supplements found in the market today contain D-theanine. At Biotics Research, we proudly use the only verified pure form of L-theanine in our products - Suntheanine®.

Because D-theanine is hard to detect, it has led to an influx of inferior L-theanine products on the market. The methods used to extract L-theanine are very precise, requiring enzymatic synthesis. Pure L-theanine is required to gain any of the compound’s beneficial effects. Production costs for the extraction of pure L theanine are currently high, which is why many manufacturers resort to the chemical synthesis of L-theanine, which isn’t as reliable as biological synthesis.

Theanine is a chiral molecule that exists as two isomers “D” and “L”. When you see the word theanine (without a prefix) this implies that we’re referring to L-theanine (γ-glutamylethylamide), which is derived from the proteinogenic L-amino acid glutamic acid (Glu), used in the synthesis of proteins.

D-theanine is the opposite of L-theanine and rarely studied. Extra care has to be taken when extracting L-theanine so that supplements have high concentrations of the biosynthetic L-theanine. Cheaper products often contain D-theanine, found to reduce the bioavailability of L-theanine.

Is Suntheanine Better Than L Theanine?

“We found all of those tested that are made through chemical synthesis claiming to be extracted from green tea actually have about 50 percent D-theanine.”

What are Other Benefits of L-theanine?

As well as offering relaxation, L-theanine has also been found to promote:

Can You Take L-Theanine with Alcohol?

Alcohol is often consumed to unwind at the end of a day. Although it will initially promote relaxation, alcohol turns to acetaldehyde in the body, which is similar to formaldehyde. Luckily L-theanine has been found to modulate the chemistry of alcohol and can be taken before or after drinking.

Research carried out in Japan found that L theanine can protect the body from the damaging effects of alcohol by reducing the production of free radicals, as well as breaking down acetaldehyde. Drinking alcohol reduces the amount of glutathione in the body. However, L-theanine can counteract this.

Stress and anxiety are on the rise and L-theanine can help. However, not all L-theanine supplements are created equally. Many are laced with D-theanine, which inhibits the absorption of L-theanine in the body. We use the only pure form of L-theanine (Suntheanine®), which ensures that the many beneficial calming effects of L-theanine are kept intact.