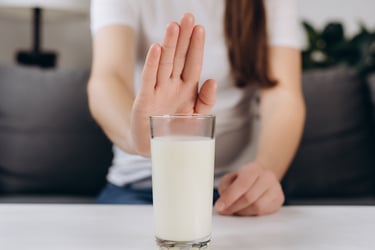 A paper published in the Annual Review of Genetics provided a detailed examination of the genetics of lactase persistence and lactose intolerance.

Lactase persistence and lactose intolerance are on opposite ends of the lactose tolerance spectrum. In healthy humans, lactase activity persists at a high level throughout adult life, and this trait is known as lactase persistence. People who are lactase persistent can usually hydrolyze large amounts of lactose and can thus consume large quantities of fresh milk without complication.

People with lactase non-persistence (also referred to as adult-type hypolactasia or lactase restriction) have a much lower lactose digestion capacity (LDC) and often, but not always, will show symptoms of lactose intolerance after consumption of milk and dairy products. Malabsorption of lactose has been observed in 37% of people with gastrointestinal issues.

The disaccharide lactose, the main carbohydrate in milk and milk products, requires hydrolysis in the intestinal tract so that the component monosaccharides galactose and glucose can be taken up into the enterocytes and used as a source of energy. This hydrolysis is catalyzed by the enzyme lactase, located in the brush border membrane of the small intestinal enterocytes. Lactase activity is high and vital during infancy when milk is the main source of nutrition. In most mammals, however, lactase activity declines after the weaning phase, and this is also the case in the majority of humans throughout the world.

The research examined and built upon previous compelling research. It shows that lactase non-persistence is partially caused by the patient’s genetics. and also looks in depth at the distribution of these different lactase phenotypes in human populations around the world. The research found that lactose phenotype distribution is highly variable and concludes that there seems to be a correlation between culture and genetic traits.

A change in genetics called a putative causal nucleotide change has been identiﬁed that occurs on the background of a very extended haplotype that is frequent in Northern Europeans, where lactase persistence is also frequent. A haplotype is a set of DNA variations or polymorphisms that tend to be inherited together.

This single nucleotide polymorphism is located 14 kb upstream from the start of transcription of lactase in an intron of the adjacent gene MCM6. This change does not, however, explain all the variation in lactase expression, but it does offer another piece of the puzzle for researchers to use as they explore the genetics behind lactose intolerance.

The Mechanisms Behind Lactose Intolerance

A recent paper highlights the mechanisms behind lactose intolerance, a clinical syndrome that causes patients to display...