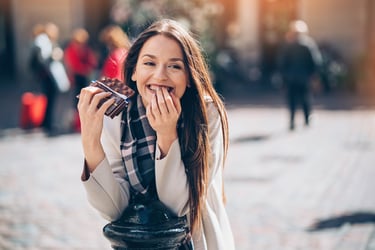 A research group which has previously explored the connections between meal timing and metabolism has turned their attention toward chocolate. In this small but interesting controlled cross-over trial, 19 post-menopausal women were assigned to consume 100g milk chocolate within 1 hour of waking, 100g in the hour before bed, or no chocolate, all in a randomized order. Women were advised to eat ad libitum, and followed each program for 2 weeks with a 1 week washout period between them.

Despite an additional 542 calories per day from chocolate, neither group gained weight vs. control. This was in part explained by a decrease in ad libitum intake (16% less with morning chocolate (MC), and 10% less with evening chocolate (EC)). Additionally, EC was associated with a 6.9% increase in physical activity, as well as higher heat dissipation (skin temperature), suggesting a greater total calorie expenditure. EC chocolate was also linked to more regular sleep patterns than either MC or control. MC chocolate was associated with 25.6% greater lipid oxidation than EC, which in turn had 35.3% greater carbohydrate oxidation. MC also had a slight drop in fasting glucose levels, while EC had a slight increase. Differences in microbiota were also observed; chocolate in general reduced Firmicutes abundance while increasing Akkermansia sp., for example, and EC significantly increased short chain fatty acid (SCFA) production.

The differences in timing are worth examining in larger trials. For instance, increased lipid oxidation and reduced fasting glucose (MC) may be beneficial for metabolic control, while an increase in SCFA (EC) might be more useful for intestinal health. Reviews of dark chocolate consumption suggest that longer trial periods and higher amounts of chocolate may have favorable effects on BMI.