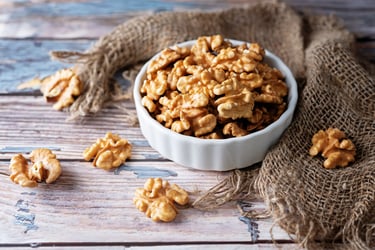 The results of a 2-year randomized controlled trial were recently published in Circulation. Known as the WAHA study (Walnuts and Healthy Aging), it documented the effects of adding walnuts into the diet of a population of healthy elderly adults in California and Spain. Over 600 participants (aged 63-79 without comorbidities) either avoided walnuts entirely or consumed approximately 15% of their daily caloric intake as walnuts (30-60 g/d).

The strengths of this study are its larger population size and longer duration, as well as its real-world results; these were free-living healthy adults living in different parts of the world choosing their own diets, showing a clear benefit for the simple addition of walnuts each day. The cardiovascular risk reduction parallels the benefits previously reported for nut consumption and lower cardiovascular mortality, as well as the associated broad improvements in lipids from a walnut-enriched diet, without an adverse impact on weight or blood pressure.

A recent study has unveiled clear evidence that a Nordic diet can help support blood sugar and cholesterol levels even i...