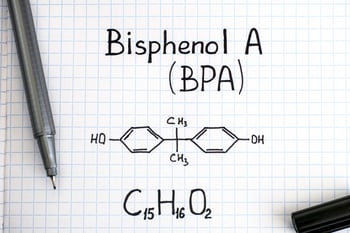 In a previous blog, we discussed the mechanisms by which Bisphenol A (BPA), a compound used to make polycarbonate plastics and epoxy resins, induces undesirable weight gain. By disrupting the entire adipocyte metabolism and inducing a pro-inflammatory state, BPA is considered an “obesegen”.

Now, in a first-of-its kind human study by the Journal of the Endocrine Society, BPA has been linked to altering insulin release in non-diabetic subjects, even when people are exposed to what is considered a “safe” daily amount. After witnessing insulin resistance in animal studies, the University of Missouri-Columbia researchers conducted this human study. Non-diabetic men and post-menopausal women were orally administered a safe dose of BPA (50ug/kg body weight, an amount comparable to what they may encounter by handling cash receipts) and were compared to a control group. They assessed the insulin response using an oral glucose tolerance test (OGTT) and hyperglycemic clamp (HG), tests that measure both the initial and later phases of the insulin response to stable levels of glucose.

In the OGTT, a “strong correlation was found between HbA1c and the percent change in the insulinogenic index (Spearman=.92) and the equivalent C-peptide index (Pearson=0.97). In the HG clamp study, several measures of insulin and C-peptide appeared suppressed during the BPA session relative to the control session; the change in insulin Cmax was negatively correlated with HbA1c and the Cmax of bioactive serum BPA”.

Results from both experiments showed that the subjects receiving “safe” amounts of BPA had an altered insulin release compared to the placebo exposure.