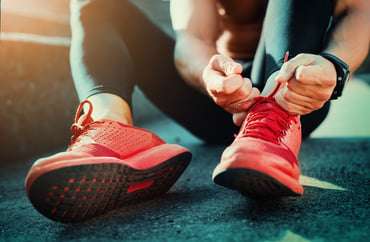 A 2019 study published in JCI Insight used a two-step operant choice protocol to identify a neurobiological mechanism that may contribute to sedentary behavior. The study was designed on the premise that the endocannabinoid system (ECS) may play a pivotal role in setting the rewarding properties of rodent wheel running, and in turn, human exercise. The study was designed to establish the motivation for exercise, where the rodents have to make effort via nose poking to obtain the reward. The first step was to place mice in chambers for two consecutive 30-minute sessions for five days. Their reward was a choice between exercise on a wheel or palatable food.

Blocking the main cannabinoid receptor - cannabinoid type-1 (CB1) by drugs or genetic deletion was found to inhibit a mouse voluntarily running. The reason for this could be due to the CB1  receptors being located on GABAergic terminals. The study concluded that CB1 receptors on GABAergic neurons positively control the motivation for running but not palatable feeding. This receptor population impacted the motivation but importantly it did not impact the duration of running. As such, they may have discovered a neurobiological process involved in sedentary behavior.

A new study by a Massachusetts General Hospital research team found that exercise is one of the best ways to turn on neu...