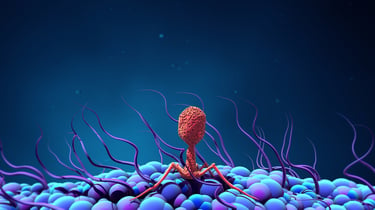 A recent study has uncovered that higher levels of the bacteriophage Caudovirales may improve cognition, specifically verbal memory and executive function.

Bacteriophages are a type of virus that replicate within bacteria, with Caudovirales and Microviridae being the most abundant in the gut virome. Growing evidence suggests that the gut microbiome may significantly influence cognition.

Previous clinical and pre-clinical research indicates that the gut microbiome is a key player in the regulation of neurodegenerative processes, cognition modulation and neurologic conditions. Yet emerging evidence shows that viruses may affect host physiology and pathology more than we realized.

This new study aimed to show through discovery (114 people) and a validation cohort (942 individuals) the connection between the gut microbiome levels of Caudovirales (from the Siphoviridae family) and Microviridae, and performance in executive processes and verbal memory.

The results show that when Caudovirales levels are higher in the microbiome of humans, performance levels go up in the area of executive processes and verbal memory. It also conversely demonstrated that increased Microviridae are linked to impairment in executive abilities. The scientists then tested the effects of transplanting human donor samples with higher Caudovirales levels (from the Siphoviridae family) into the microbiome of mice. They saw higher scores in the novel object recognition and up-regulated memory-promoting genes in their brains. The scientists also supplemented fruit flies with bacteriophages with Siphoviridae, with the results being an increase in memory scores as well as an improvement in the upregulation of memory-involved brain genes.

A new study by a Massachusetts General Hospital research team found that exercise is one of the best ways to turn on neu...