Could the "Green" Mediterranean Diet Be Healthier? 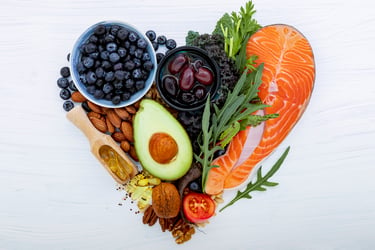 A recent study suggests that a greener version of the Mediterranean diet could further benefit the cardiometabolic state and reduce cardiovascular risk beyond the effects of the original diet.

The Mediterranean diet is one of the best-studied diets for cardiovascular health, so it has gained popularity in clinical settings and become the backbone of clinical cardiology dietary guidelines. It consists of fish, fruits, vegetables, whole grains, legumes/nuts, moderate alcohol consumption and monounsaturated fats from olive oil, and has been shown to reduce the burden of cardiovascular disease, as well as a long list of other chronic diseases. The inclusion of foods typical of the Mediterranean diet and greater adherence to its focus on a healthy profile of fat intake, low carbohydrates, low glycemic index, a high content of dietary fiber, antioxidant compounds and anti-inflammatory effects has led to better nutrient profiles both in children and adults, as well as recommendations for use of the diet in public health nutrition interventions.

However, scientists wanted to find out whether a greener version of the Mediterranean diet supplemented with walnuts, green tea and Mankai, and lower in meat, might yield even better results for people at risk of cardiovascular disease.

Two hundred and ninety-four sedentary and moderately obese people with an average age of 51 were randomly assigned to three dietary groups. The first group received recommendations of physical activity levels and a basic outline for how to achieve a healthy diet. The second group also received physical activity guidelines as well as advice on how to follow a calorie-restricted traditional Mediterranean diet of 1500.1800 kcal/day for men and 1200-1400 kcal/day for women. The diet was low in simple carbohydrates, rich in vegetables and poultry and fish replaced red meat. It also included 28 g/day of walnuts. The third group were provided with the same guidance on exercise as well as how to follow a calorie-restricted, greener version of the second group’s diet.

The green diet included 28 g/day of walnuts, avoidance of red and processed meat, and higher quantities of plant matter. Three or four cups of green tea were added, as well as 100 g of frozen Mankai, a high-protein form of the aquatic plant duckweed, taken as a green protein shake and as a partial substitute for animal protein.

The results confirm that an additional restriction of meat intake and a parallel increase in plant-based, protein-rich foods may further benefit cardiometabolic health.

A new study investigated the role of the Mediterranean diet on the gut flora of an elderly group over one year, and the ...