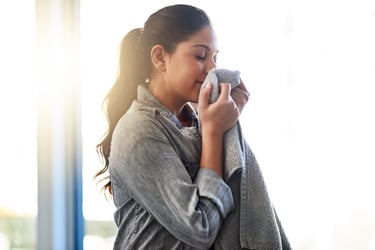 A recent study from NYU Grossman School of Medicine, which was published in the journal Science, discovered an electrical signal that is turned into a smell in mice brains. The researchers created man-made energy signatures that triggered the olfactory bulb in mice. Lead investigator Edmund Chong, MS, a doctoral student at NYU Langone Health stated, "Decoding how the brain tells apart odors is complicated, in part, because unlike with other senses such as vision, we do not yet know the most important aspects of individual smells." In this study, Chong and his team were looking to track single smell signatures across several types of neurons in the brain to understand the distinguishing factors of each smell.

The researchers used optogenetics, a process by which brain cells can be activated by shining a light on them. They then trained the mice to identify a signal that was generated by activating their glomeruli with light. The glomeruli are bundles of nerves in the olfactory bulb that are triggered with scent. The mice pushed a lever and were given a reward of water when they recognized an odor. The researchers said that the glomeruli activations worked together "like the notes in a melody." For the first time a code for how the brain converts sensory information into perception, which in turn produces a behavior, has been established.