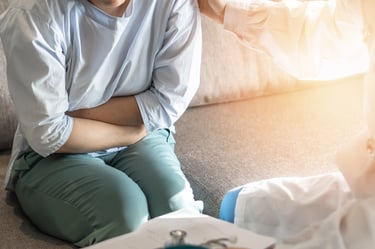 In a recent open-label non-randomized trial, 42 participants with IBS (Rome IV criteria) began a personalized 6-week gluten-free and low fermentable oligo-di-mono-saccharides and polyols (FODMAP) diet; 30 completed the trial. Just over half had IBS-D, though all subtypes were included. Previous studies suggest that the majority of people with IBS benefit long-term on a low FODMAP diet, particularly with IBS-D. There are some exceptions, such as individuals with genetic polymorphisms in the sucrase—isomaltase (SI) gene. Additionally, although celiac disease is distinct from IBS, some participants with IBS also do well on a gluten-free diet.

In this study, mean calprotectin levels decreased significantly and 73% of participants had improved symptoms, with just over half experiencing a 30-60% reduction. DNA analysis of fecal samples also revealed substantial changes in microbial diversity. For example, Firmicutes was initially the most prominent phylum but dropped significantly, while Bacteroidetes had the greatest increase, the ratio between them dropping from 2.6:1 to 0.8:1. Other changes included significant increases in Bifidobacterium and Lactobacillus genera. This study lends further support to a growing evidence base which may help to identify genetic and/or microbial factors that can lead to personalized recommendations, such as a bacterial fingerprint that helps predict the efficacy of the low FODMAP diet.