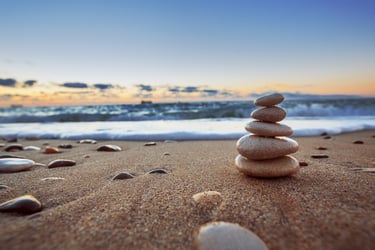 A recent paper published by the Swedish University of Agricultural Sciences studied how people’s stress levels were affected by both the scent and virtual reality scenes of nature highlighting the science behind the health benefits of nature. 154 participants took part in the study in which they visited one of three virtual environments: a forest, city or park. Previous research has found that natural scenes can lower heart rate and restore focus. However, most of these studies were based on self-evaluation. Marcus Hedblom, an ecologist at the Swedish University of Agricultural Sciences headed up the study that was designed to identify physiological mechanisms and sensory stimuli that tangibly reduce stress when participants were exposed to natural environments.

The “virtual city” scene was visually made up of buildings, with the sound of traffic and the scent of diesel, tar and gunpowder. The “virtual park“ was comprised of trees and buildings, combined with the sound of a single willow warbler bird and the smell of grass. The final virtual reality scene was “the forest” and was made up of images of a wide range of trees and shrubs. The forest scent was a combination of mushroom and fir, while the sound was a chorus of nine birds singing.

A small electric shock was given to the participants to stimulate a physiological stress response and was measured by a rise in electrical conductance of their skin. Researchers monitored how fast the subject’s conductance spiked and fell when exposed to each of the three environments. As expected, the city scene resulted in faster skin conductance. While the forest and park scenes resulted in faster stress reduction. Interestingly the researchers found that smell, in particular, had a powerful effect on reducing stress.

Hedblom suggests that the smell signal travels directly to the hypothalamus. Gretchen Daily, an ecologist from Stanford University has pointed to the possibility of certain chemicals in plants influencing stress hormones. She stated, “It’s all a really new and desperately needed area of research.”

Does Mindfulness Really Help with Stress?

According to recent research, dispositional mindfulness may not affect people during the experience of active stressors,...