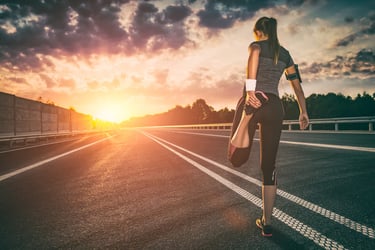 Two new interdependent papers have been released studying time-dependent effects of exercise. The studies show that exercising at different times of the day can modulate the outcomes, showing promise for athletes looking to up their game. Circadian science studies systemic energy homeostasis and metabolic pathways in relation to the body’s in-built circadian rhythm.

Cells work autonomously with their own core clocks and the circadian system is managed in the suprachiasmatic nuclei (SCN) of the anterior hypothalamus. The system is modulated by light/dark cycles and also by feeding and fasting cycles that signal metabolic changes. Feeding at inappropriate times has long been known to disrupt the body’s homeostasis and contribute to the development of chronic disease. It seems that exercising at the wrong times has equally deleterious effects.

Nocturnal mice, which have a different circadian rhythm to human models, produced interesting results. For example, they could run for longer on treadmills late in their active phase. For humans that active phase is late in the afternoon. The mice showed gene expression known to effect exercise performance peroxisome proliferator-activator receptor (PPAR), AMPK and hypoxia-inducible factor (HIF). Mice without the circadian components - Per1 and Per2 do not show any time-specific preferences to exercise. Interestingly even mice without a circadian clock respond well to intermittent fasting and show improvement when their eating window is 8-10 hours in a day.

Exercising late in the evening was found to create incomplete β-oxidation and mitochondrial stress. Early morning exercise was found to lead to an increase in energy expenditure not just at the time of exercise, but for days after the activity. In another study, afternoon high-intensity interval training (HIIT) was better at lowering blood glucose levels. Adverse effects were found with early morning HIIT training, as it raised the blood sugar of the men in the trial who were suffering from Type 2 Diabetes.

Conversely cellular adaptation alters over time, indicating that the short-lived benefits of exercise timing might need to be cycled. The HIF1 response reduces over repeated exercise due to the induction of counter-regulatory mechanisms.

More studies are needed to pinpoint the best times to exercise for different individual circumstances, but timing, it seems, does matter.