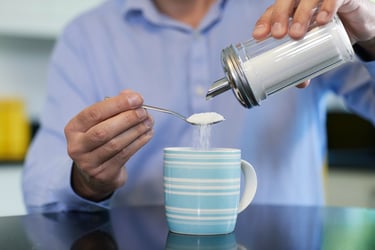 The incidence of colitis, which involves inflammation of the colon’s lining, is on the rise in the US, even in children. Recently, Hasan Zaki, PhD and lead researcher at UT Southwestern, and his team looked at the modern Western diet (high in fat, sugar, and animal protein) to find out if they could establish the main underlying cause for the development of this disease. Previously, high-fat diets have been found to impact inflammatory bowel disease (IBD), which encompasses colitis. The role that sugar plays, however, has been more controversial. Zaki and his team fed mice a solution of 10 percent concentration of dietary sugars, such as glucose, fructose, or sucrose, diluted with water. They found that mice with a genetic or chemically-induced predisposition to colitis developed severe symptoms when given sugar. By using gene-sequencing, Zaki and his team were able to conclude that the glucose solution, in particular, significantly changed the communities of the microbiota population of the mice.

Specifically, the gut bacteria Akkermansia, a mucus-degrading gut bacterium, proliferated, while other beneficial bacteria like Lactobacillus became less abundant. The researchers reported "The mucus layer protects intestinal mucosal tissue from infiltration of gut microbiota...Higher abundance of mucus-degrading bacteria, including Akkermansia muciniphila and Bacteroides fragilis, in glucose-treated mice is, therefore, a potential risk for the intestinal mucus barrier.” Breaching the protective epithelial barrier triggers intestinal inflammation and plays a key role in the development of colitis. While glucose made the most impact, all three sugars that were tested altered the gut microbial terrain. "Our study clearly shows that you really have to mind your food," says Zaki. Future research is planned to establish whether sugar impacts the development of other inflammatory diseases such as fatty liver and obesity, as well as neurodegenerative disorders like Alzheimer’s disease.