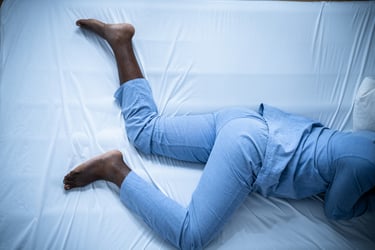 Results of a small clinical trial suggest that pycnogenol may provide some benefit for people suffering from Restless Legs Syndrome (RLS), a difficult-to-manage condition associated with increased cardiovascular risk. In a non-blinded and non-randomized trial, otherwise healthy adults with RLS (mean age 44) were given either 150mg pycnogenol per day (n=21) along with standard therapy (ST), or ST alone (n=24). ST included regular rest, mild exercise, and B&C vitamin supplementation) over a 4-week period.

While non-significant improvements were noted in the group only receiving standard therapy, the pycnogenol group had significant improvement in many symptoms of RLS. For example, 63% experienced less throbbing, 72% less aching, 61% had decreased sleep problems, etc., vs. 6%, 3%, and 16%, respectively in the ST alone group. The pycnogenol group also had a significant reduction in the need for pain medication, as well as improvement in several other markers including a normalization in resting flux and an increase in the venoarteriolar response, as well as a reduction in oxidative stress.

While obvious limitations of this study include the lack of blinding and of a placebo group, the large symptomatic improvements warrant a well-controlled study and reflect a previous clinical trial that demonstrated a clinical benefit of antioxidant therapy in RLS.