A New Sleep Study Overturns Beliefs on Obesity and Sleep 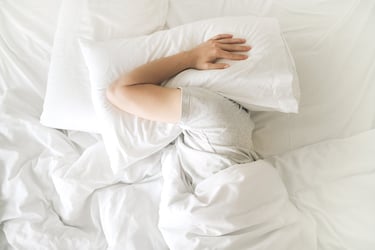 A recent study published in PLOS Biology has shown that the connection between obesity and sleep loss might work in the opposite way to what we previously imagined. Sleep deprivation has been considered a cause for obesity. However, an investigator from the University of Pennsylvania School of Medicine found that it isn’t necessarily sleep loss that leads to obesity. In fact the research exposed that the opposite was true - obesity could lead to sleep loss. Reno et. al. studied the Caenorhabditis elegans (C. elegans), which is a microscopic worm with just 302 neurons. One reason they chose the C. elegans is because of their simple and limited number of neurons, making them easier to study. A human has over 86 billion neurons, which makes for complex investigation.

Of the 302 neurons in the C. elegans worm, one has been isolated as the “sleep regulator.” Reno and his team wanted to know more about the connection between obesity and sleep. They did this by switching off the sleep regulator neuron in the worms, which meant that the worms no longer had the ability to sleep. When this neuron was turned off a steep drop in adenosine triphosphate (ATP) levels was observed. ATP is the energy currency of the body, fueled by vitamin D. Co-author Raizen explained "That suggests that sleep is an attempt to conserve energy; it's not actually causing the loss of energy."

In previous studies the gene KIN-29 was isolated and found to be akin to the human Salt-Inducible Kinase (SIK-3) gene. When the KIN-29 was switched off, the C.elegans built up large fat stores in their bodies, similar to the obesity condition in humans. Researchers concluded that sleep is promoted when fat stores are released. Interestingly, when this gene was switched on, the worms released their fat and were able to sleep. This research is a step forward in understanding the connection between sleep deprivation and fat accumulation. Raizen concluded "There is a common, overarching sentiment in the sleep field that sleep is all about the brain, or the nerve cells, and our work suggests that this isn't necessarily true," he said. "There is some complex interaction between the brain and the rest of the body that connects to sleep regulation."

END_OF_DOCUMENT_TOKEN_TO_BE_REPLACED

Study Finds Anger is Amplified with Lack of Sleep

A paper first published by The American Academy of Sleep Medicine (AASM) in the Journal  - Science Advances looked at th...