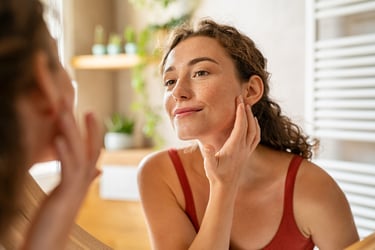 Recent research has found that cannabinoids’ ability to help modulate the body’s natural inflammatory response may be behind their usefulness for a wide range of skin issues. At the time of writing, 28 states allow comprehensive medical cannabis programs and 1 in 10 adults who use cannabis in America use it for medical reasons. Topical cannabinoid products with little or no psychotropic effect are now being used for skin issues in small-scale trials with notable results.

Previous research began to focus on the existence of a functional endocannabinoid system in the skin, and implicating it in various biological processes. These included growth, proliferation, apoptosis and hormone production in the different cell types in the skin. A very interesting realization occurred through learning this new fact: that the skin is actually a neuro-immuno-endocrine organ that already has endocannabinoids within its make-up. This fascinating field now deserves further attention to help people with various skin issues, particularly pruritus, commonly and simply known as itch.

This review focused on showcasing the most promising effects cannabinoids can have on skin and identifying the key actions behind the benefits.

The researchers found that cannabinoids have the potential to help with severe itching or pruritus. One study showed that in 8 of 21 patients who applied a cannabinoid cream twice daily for 3 weeks completely relieved itchy skin and improved dry skin symptoms. Another similar study of an emollient cream containing N-palmitoyl ethanolamine (PEA) showed a good antipruritic effect in 14/22 individuals and an average reduction in itch of 86.4%.

Animal studies suggested that the mechanism behind the improvements seen in that research may have been linked to their influence on swelling and a healthy inflammatory response. Research showed that the effects could not be linked to descending serotonergic or noradrenergic systems. In fact, mounting evidence supports the positive effects on cutaneous inflammatory pathways from a range of cannabinoids, with the notion that this largely helps in the battle of skin issues, especially pruritus.

The results of a clinical trial conducted by researchers from the University of Columbia in Canada were published in the...