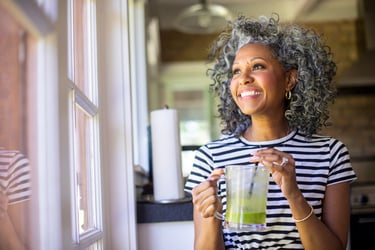 One of the side effects of aging is that chronic systemic inflammation alters neuroinflammation of the brain. A recent study from the University of Illinois demonstrated that supplementing with dietary fiber reduces brain inflammation caused by the aging process.

Even during healthy aging there is a disruption in the communication and balance between the brain and immune system. Overproduction of the pro-inflammatory cytokine interleukin (IL)-1β has been shown to play a role. This study demonstrated that aged mice had decreased methylation of the IL-1β gene promoter in primary microglia basally, causing overproduction of IL-1β and causing cognitive dysfunction in rodent models. Increased IL-1β in aged individuals is associated with risk of neurodegenerative diseases.

The research team proposed that certain nutrients can manipulate the epigenome to delay brain aging by preventing or reversing microglial aging. The study looked specifically at butyrate, a short-chain fatty acid (SCFA) produced by bacterial fermentation of fiber in the colon. There is evidence that butyrate can affect DNA methylation.

The characteristic that butyrate is synthesized endogenously via fermentation of non-digestible fibers by bacteria in the colon makes the prevention or at least suppression of neuroinflammatory conditions such as aging possible.

The study supports a role of high fermentable fiber in altering the microbiome and potentially immune infiltration/gut permeability, which supports beneficial microglial function in an aging population. The authors concluded that “high fiber supplementation in the elderly therefore may be a non-invasive strategy to increase butyrate levels and support an environment with decreased chronic neuroinflammation.”

A recent study on the differences between a Western diet versus a fiber-rich, traditional Tanzanian diet shows the latte...