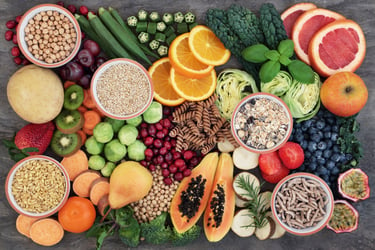 A recent study on the differences between a Western diet versus a fiber-rich, traditional Tanzanian diet shows the latter may lead to the production of fewer inflammatory proteins by the immune system.

Previous studies have shown a new wave of urbanization in sub-Saharan Africa, which is having important consequences on health and disease patterns in the area. The main changes include higher rates of non-communicable diseases, which could now be explained by diet. Many low-to-middle income countries have shown signs of this connection between Western diets and non-communicable disease burden.

This new study looked at around 300 Tanzanian people, some of whom were living in the city of Moshi and had the eating habits and lifestyle associated with the West. The other group was in the countryside and were eating a traditional diet high in whole grains, fiber, fruits and vegetables.

The results showed metabolite levels in the blood of the two groups were significantly different. Participants from rural areas had higher levels of flavonoids and other anti-inflammatory substances in their blood. The blood from those in urban areas contained more saturated fats and processed foods as well as increased levels of metabolites involved in cholesterol metabolism. The scientists also found a seasonal change in immune system activity of the urban group, which had a less activated immune system during harvest time in the area.

This new data supports the data that already exists regarding adding whole, fiber-rich foods to the diet to help improve overall health and metabolic balance.