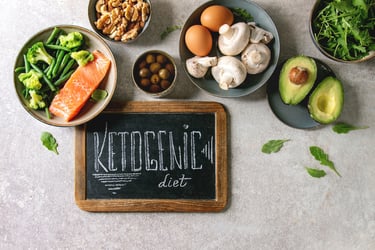 How the ketogenic influences the microbiota is a favorite research topic today. Some data suggests that ketogenic diets may compromise the bacterial diversity in the gut, for example, decreasing the common Bifidobacteria. And in a recent single-center, randomized, double-blind crossover pilot study published in the journal EBioMedicine, modifiable fungi in the gut of patients with mild cognitive impairment (MCI) was identified. Principal investigator Hariom Yadav, assistant professor of molecular medicine at Wake Forest School of Medicine, and his team analyzed Alzheimer’s markers in cerebrospinal fluid and gut bacteria.

Firstly, the researchers identified fungal microbes in the gut by sequencing the rRNA ITS1 gene. The 17 participants were older adults, 11 of which had an existing MCI, and six had normal brain functioning. Yadav and his team used a six-week dietary intervention, whereby the volunteers consumed a modified Mediterranean ketogenic diet or the American Heart Association Diet. They found that the gut microbiome could be modulated through the Mediterranean ketogenic diet. Specifically, harmful fungi in the gut are reduced, which might, in turn, reduce the onset of neurological disease processes.

Yadav concluded his study that dietary habits such as eating a ketogenic diet can reduce harmful fungi in the gut, which might help influence disease processes in the brain.

The lead investigator of the UCSF study, Peter Turnbaugh, PhD concluded, “...the effects of ketogenic diets on the microbiome are not just about the diet itself, but how the diet alters the body’s metabolism, which then has downstream effects on the microbiome.” He continued, “For many people, maintaining a strict low-carbohydrate or ketogenic diet is extremely challenging, but if future studies find that there are health benefits from the microbial shifts caused by ketone bodies themselves, that could make for a much more palatable therapeutic approach.”

A recent review has uncovered the relationship between lung function and poor gut health.

END_OF_DOCUMENT_TOKEN_TO_BE_REPLACED

New research published in Nature by Rockefeller University on October 29, 2020, is changing the way we perceive the gut ...