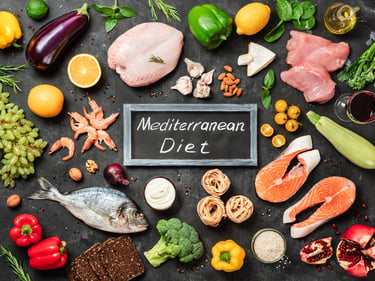 Memory and thinking tend to decline when adults enter their late 70s, but the underlying factors for this diminished cognition have been poorly understood. Recent research from the University of Edinburgh has exposed that this cognitive decline can be mitigated by eating a Mediterranean diet, particularly if the diet is filled with green leafy vegetables and lower meat consumption.

Researchers studied over 500 people over the age of 79 who did not have dementia. Three hundred fifty of the participants also had a magnetic resonance imaging (MRI) brain scan. Participants were given a series of tests to gain insights into their problem solving, memory, and word knowledge capabilities. They also filled in a questionnaire about their diet. Using statistical analysis, the team correlated a person’s diet with their mental and physical health later in life. Memory and thinking test scores improved in those eating a Mediterranean diet, while grey and white matter, the markers of healthy brain aging, showed no changes in either group.

Higher cognitive function scores were found in those who closely adhered to a Mediterranean diet. Even when other lifestyle components like smoking, childhood IQ, and adherence to exercise were factored in, lower red meat consumption and eating lots of leafy greens were most strongly associated with better cognition. Dr. Janie Corley, one of the lead researchers of the study , concluded, "Eating more green leafy vegetables and cutting down on red meat might be two key food elements that contribute to the benefits of the Mediterranean-style diet. In our sample, the positive relationship between a Mediterranean diet and thinking skills is not accounted for by having a healthier brain structure, as one might expect. Though it's possible there may be other structural or functional brain correlates with this measure of diet, or associations in specific regions of the brain, rather than the whole brain, as measured here."

Results from the UK Biobank study, one of the largest cohorts of middle-aged adults to provide data for HbA1c across the...

END_OF_DOCUMENT_TOKEN_TO_BE_REPLACED

Data from more than 1,000 brain scans have revealed interesting patterns in the way large-scale systems in the brain int...

END_OF_DOCUMENT_TOKEN_TO_BE_REPLACED

Back in February of 2010, the BBC reported on Ballabgarh, a village in northern India that had an unusually low rate of ...