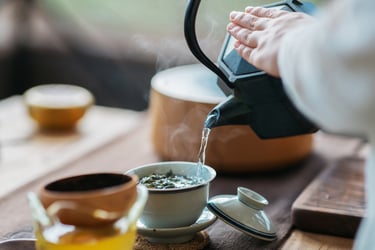 For many, having to quarantine has produced anxiety. One finding in a recent paper published in the Philosophical Transactions of the Royal Society suggests this could be due, in part,  to the fact that our human rituals, like weddings, parades, and funerals, have been canceled. Dimitris Xygalatas, Assistant Professor of Anthropology at the University of Connecticut has been studying human behavior and the roles that rituals play in our daily lives for several years. In one study Xygalatas and his team found that inducing anxiety made people more ritualistic, repetitive, and structured.

To further this research, the team headed to Mauritius where they induced anxiety in a natural environment. This was done by asking the volunteers to plan for a natural disaster. One-half of the participants were asked to sit in a relaxed non-religious space, while the other half sat in a local temple where a familiar religious ritual took place. Heart rate variability was measured with wearable technology, exposing the stress rate of the participants. Both groups experienced the same stress initially, however, those situated in the religious ritualistic environment experienced a greater reduction in stress.

"The mechanism that we think is operating here is that ritual helps reduce anxiety by providing the brain with a sense of structure, regularity, and predictability," Xygalatas explained. He continued "We come to expect certain things -- our brain fills in the missing information for the blind spot in our vision, and prompts us to anticipate the next word in a sentence - all of these things are due to this effect because our brain makes active predictions about the state of the world."

Going forward, Xygalatas and his team are going to further explore the complex underlying mechanisms that ritual has on the human psyche. He feels that rituals are like life hacks or mental technologies that allow us to reduce stress and perform better.