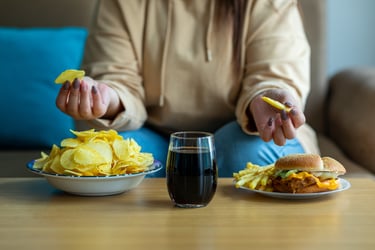 In a paper published in the journal Nature Communications, researchers identified a circuit in the brain that is thought to alter food impulsivity. Scientists from UGA College of Family and Consumer Sciences discovered a circuit in the brain that is responsible for the ability to say no to food triggers - the same triggers that activate a behavioral response in addicts of all kinds, including gambling, drugs, food and shopping.

Emily Noble, one of the assistant professors involved in the study, noted, "There's underlying physiology in your brain that is regulating your capacity to say no to (impulsive eating)." The researchers found that a particular set of receptors in the hypothalamus respond to melanin concentrating hormone (MCH). While previous studies have exposed that MCH plays a role in up-regulating food intake, this was the first study of its kind to find out that MCH is also implicated in impulsive behaviors.

In the study, animal models were offered a lever that released a high-fat, high-sugar pellet of food. They also made the rats wait 20 seconds after the lever was pressed to receive the pellet of food. This allowed Noble and her team to analyze the impulsivity of the rats' choices. They activated the MCH neural pathway from the hypothalamus to the hippocampus to alter their inhibitory control.

The MCH-pathway was found to selectively impact the animal’s inhibitory control, which is their overall ability to stop themselves from trying to get the food. The researchers found that how much the animals liked the food, or motivation to eat specific food, was not impacted; rather, the circuit triggered impulsive behavior.

Noble concluded, "Understanding that this circuit, which selectively affects food impulsivity, exists opens the door to the possibility that one day we might be able to develop therapeutics for overeating that help people stick to a diet without reducing normal appetite or making delicious food less delicious."

END_OF_DOCUMENT_TOKEN_TO_BE_REPLACED

A fascinating new paper published in the Journal of Neuroinflammation, by RMIT University, has found that the brain’s mi...