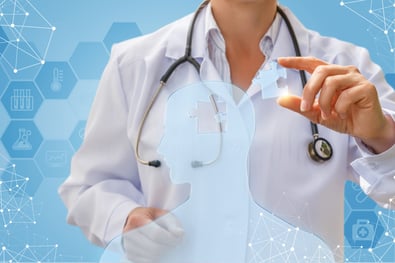 What happens in vagus…

Actually, what happens in the vagus nerve doesn’t stay in the vagus nerve. It leaves, taking information about the body’s organs to the brain via “afferent fibers”, and is considered the reason why we have a gut-brain connection. Much attention is being given to this key connector in treating gastrointestinal and psychiatric disorders, and, in a recent review article, Breit, S. et al. share promising evidence that vagus nerve stimulation (VNS) (and meditation techniques) could be adjunct therapies to support a number of conditions, such as treatment-refractory depression, stress disorders, inflammatory diseases, and mood and anxiety issues.

The vagus nerve, one of twelve cranial nerves, represents the main component of the parasympathetic nervous system, which is responsible for a number of bodily functions including mood, immune response, digestion and heart rate. This long meandering bundle of motor and sensory fibers links the brain stem to most of the body’s organs. Because of its influence on the parasympathetic nervous system, it assists in the regulation of blood pressure and blood glucose balance, promotes general kidney function, helps release bile and testosterone, stimulates salivary secretion, assists in controlling taste and releasing tears, and plays a key role in women’s fertility issues.

When the vagus nerve is stimulated, it leads to the release of acetylcholine (Ach). Ach helps mediate parasympathetic effects, and also stimulates muscle contractions in the parasympathetic nervous system. So, in addition to being the gut-brain connector, it is also a major player in the neuroendocrine-immune axis, which is the first line of defense against inflammation. Chronic exposure to elevated inflammatory markers, such as cytokines, may lead to depression. Therefore, VNS therapy has been shown to have a positive effect on depressive symptoms. The VNS also leads to an enhancement of firing activity of norephinephrine (NE) neurons, and consequently, an increase in the firing activity of serotonin neurons. Like other neurotransmitters, VNS has also been reported to effect chemical changes in monoamine metabolism resulting in dynamic changes of monoamine metabolites in the hippocampus. Additionally, the VNS has been reported to influence hippocampal neurogenesis, a process necessary for the maintenance of “normal mood.”

Another recent and exciting study showed that VNS helped with stroke recovery by doubling the benefits of rehabilitative training, and enhancing structural plasticity in motor networks.

Not surprisingly, nutrition support including probiotics and antioxidants impact vagus nerve activity via their role in the gut microbiota. The gut microbiotia’s communication with the brain involves the vagus nerve, and this interaction may lead to mediating effects on the brain and, subsequently, behavior.

Recent research has revealed that the microbiome that lives in the digestive tract may play a significant role in depres...

END_OF_DOCUMENT_TOKEN_TO_BE_REPLACED

A new report that studied genetic variants linked to mental health was published in the American Journal of Psychiatry o...