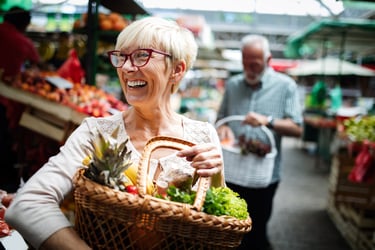 A new study investigated the role of the Mediterranean diet on the gut flora of an elderly group over one year, and the results showed an improvement in health outcomes and reduced frailty.

The Mediterranean diet is a way of eating based on the traditional cuisine of countries bordering the Mediterranean Sea. It is naturally high in polyphenols from extra-virgin olive oil, nuts, red wine, vegetables, fruits, legumes, and whole-grain cereals. These compounds act as antioxidants in the body and have been found to inhibit the chronic vascular inflammation associated with atherosclerosis, or build up in the arteries, as well as other age-associated disorders., However, this study explored the relationship between the Mediterranean diet, gut health, frailty and overall health status in elderly people.

In the study, the researchers profiled the gut microbiota of 612 non-frail and pre-frail individuals across five different European countries: the UK, France, Netherlands, Italy, and Poland before and after the 12-month MedDiet intervention tailored to the elderly participants began.

Following the diet increased the abundance of specific types of microorganisms that were positively associated with markers of low frailty and improved cognitive function, and negatively associated with markers that indicate inflammation, such as C-reactive protein and interleukin-17. The associations were independent of factors such as age and body mass index. A microbial metabolite profiling process also revealed that the microbiome changes the diet created was associated with an increase in healthy short/branch chained fatty acid production and lower production of the production of unhealthy substances, such as ethanol, carbon dioxide, and p-cresols. The findings support the feasibility of improving the diet to positively affect the gut microbiota in order to promote healthier aging and lower frailty in the elderly population.

END_OF_DOCUMENT_TOKEN_TO_BE_REPLACED

More Evidence of the Importance of Microbiome Diversity

Recent research has confirmed a correlation between gut microbiome composition and the markers of health and disease acr...